The beach is an amazing place to visit with the whole family. The intertidal zone is a place full of life, a lot of it edible. Take a look for example, at this edible cockle:

If you go out to harvest wild oysters, you’re likely to find mussels and cockles too. Cockles are very rich in iron, which is great if your diet happens to be iron deficient. If you already eat a lot of red meat, don’t bother eating cockles, you’re getting enough iron already.

Why I gather wild oysters

I have many reasons to gather oysters. I enjoy the taste of oysters, especially with a bit of lemon juice. However, I don’t enjoy spending a lot of money on food if it’s not necessary. Gathering your own food is of course also lots of fun!

Finally, oysters are very healthy. If you’re looking for a good source of vitamin B12, Taurine and Zinc, look no further. Oysters are the richest dietary source of Zinc you can find. Zinc is important for healthy skin, but it’s also important for our reproductive health. That’s probably where oysters got their reputation.

Where to gather wild oysters

Generally speaking, oysters should be easier and less time-consuming for you to find than cockles and mussels. In addition, oysters can be an invasive species in many places you can find them, thus eating them can be good for the local ecosystem. The pacific oyster grows rapidly and is widespread in many places where it has been introduced. You can expect to find them in the Netherlands, parts of Germany, Denmark, New Zealand and many other places. In fact, all places in orange on the map below here should have pacific oysters:

How to prepare for gathering wild oysters

Before you go out to gather wild oysters, you first have to prepare yourself. The ideal time to gather oysters is during the winter, when they’ve built up a nice layer of fat. I generally don’t gather oysters in the summer, they don’t taste nice then as they’re busy spawning.

To start with, you have to find out what the law says about gathering oysters where you live. In most places, the government has no problem with people gathering oysters if you don’t gather so many of them that it starts to look like commercial use.

Second, you have to figure out where they grow. If you live near a big intertidal zone, you may have some oyster reefs growing there. There are many different ways of finding out, the Internet is of great assistance.

If you’ve found a place to harvest oysters, check two things: Check the news to see if there are any dangerous algae that were recently spotted. This is rarely a problem, especially outside of the summer months, but it doesn’t hurt to check. The second thing to remember is that you need to figure out the tide! You will want to plan your journey so that you arrive 30 to 60 minutes before the tide reaches its lowest point.

As you plan for your journey, I would recommend gathering the following supplies to bring with you:

How to gather wild oysters

The actual gathering part isn’t very difficult. You don’t have to look far to find good oysters on an oyster reef, although you’ll find that many of the oysters you gather might be empty shells, so always make sure to check them before dropping them into your bucket.

Take a look at this oyster to see how easy they can deceive you:

That looks like a tasty oyster, don’t you think?

Well you’d be mistaken, except for some growing seaweed, this oyster was empty!

As you might notice from these pictures, wild oysters don’t always have the exact charismatic shape they have in a restaurant. The shape doesn’t change the flavor however. Nonetheless, you can find charismatic oysters on the beach as well, like this one: 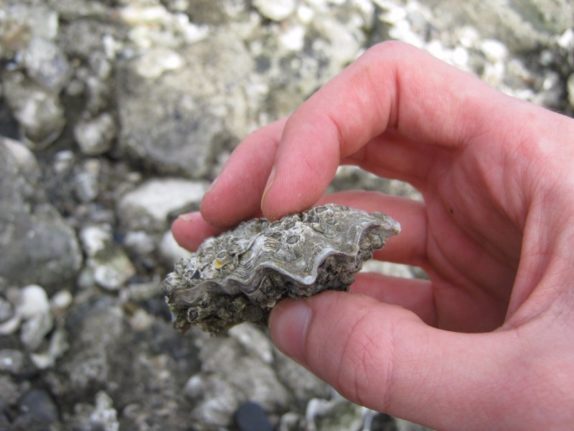 If you only want pretty oysters you might have to look a little longer before your bucket is full however. Below you can see the result of about half an hour spent gathering oysters:

That’s not a full bucket, but keep in mind I have to finish these oysters all by myself. Stored in the refrigerator, they will last about two weeks before I no longer dare to risk eating them. After one week, I tend to prefer eating them boiled rather than raw.

What to do with the oysters you gathered

I always try to eat some on the spot, but I bring most back home with me. The ideal way to eat an oyster is raw. The unique flavors and healthy nutrients are best preserved by eating the oyster raw. For this reason, getting an oyster knife is really worth looking into. You’ll want a long thin knife, that allows you to force your way into the oyster. Here’s a good instruction video showing how to open an oyster:

At first, opening an oyster will be rather difficult for you, but you’ll get better at it as you go along. If you find yourself struggling too much with opening oysters, here’s a suggestion you should consider: When you buy or gather oysters, get smaller ones! The smaller ones tend to be easier to open than bigger oysters.

If you do have big oysters you’re struggling to open, you can heat them. In my own experience, the bigger oysters are better off being boiled than being swallowed raw. You can generally prepare them like you would prepare mussels. They taste similar to mussels, but better.

Either way, before you go about opening your oysters, I would recommend thoroughly washing them, especially wild oysters you harvested yourself. You should eat them right away when you’ve washed them, don’t wash them before you store them. If you have any other questions, feel free to ask them in the comments.