This idea was sent in by Simon F.

Mankind has a bottomless reservoir of laziness, which is fertile ground for the best inventions in history. The dishwasher, television remote, and cruise control are a few examples. Here’s the latest in the important category of avoiding unnecessary work: the bucket mailbox. 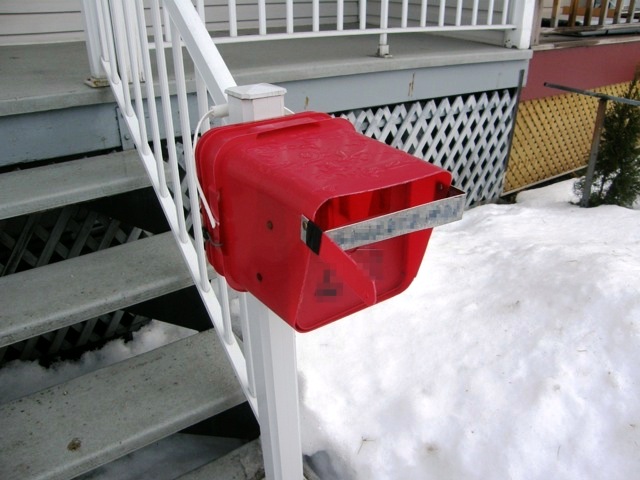 Our reader describes the inventor’s intentions:

“He built this a few years ago to avoid shoveling snow early in the morning for the mailman. He took a former dog cookie bucket and cut the bottom off at an angle. The mailbox is secured onto the railing by its built-in handle and a homemade bungee. Later he added on a “flag” for the mailman to lift once mail was deposited.”

To make your own, you just need a 4 gallon square pail and an exacto knife or similar cutting tool. Angle the cut to help keep moisture off your mail.

If you look closely, you’ll notice that the flag handle has the name of the resident written on it, clearly identifying it as a mailbox.

And finally, here’s the mailbox many fellow children of the 80’s will remember from their childhood: The Szalinski’s Rube Goldberg mailbox from the classic “Honey we Shrunk Ourselves.”