A full 5 gallon bucket weighs 40 pounds. Sometimes that’s too much to carry on foot. Fortunately, there’s a bucket invention for every problem you can think of. 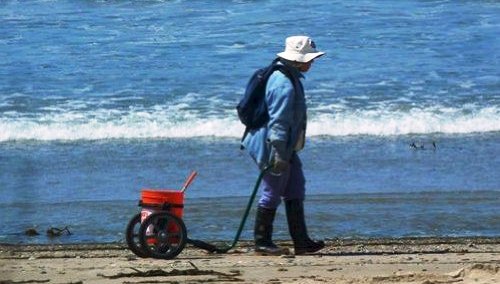 Its large wheels make it more stable than the bucket dolly. And it tackles stairs without a problem. 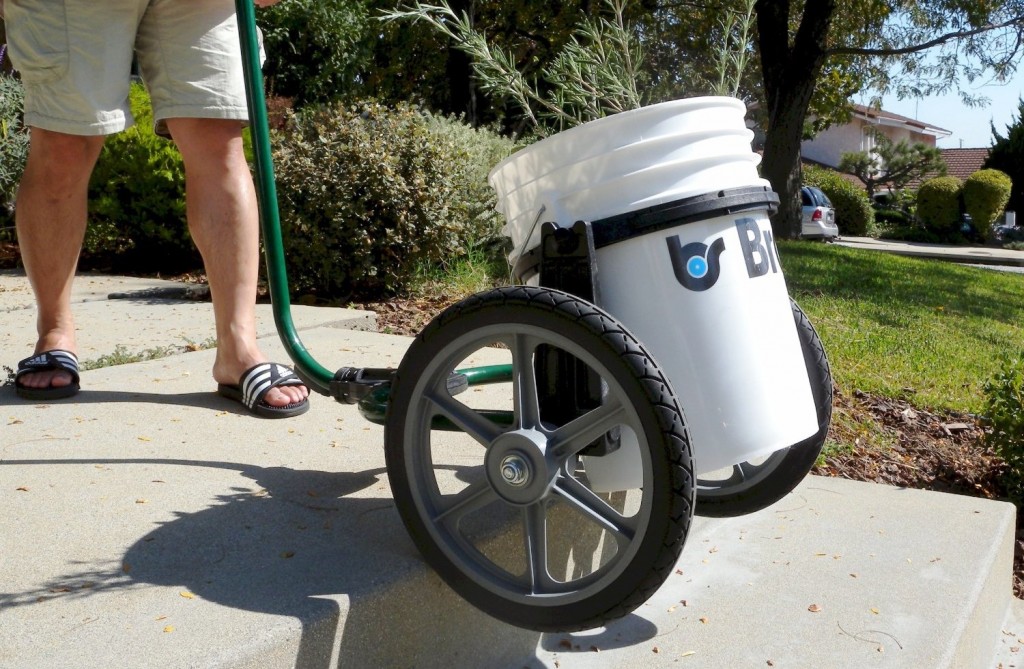 I’m going to compare this sexy bucket cart with our rust-bucket of a wheelbarrow. I had to use this thing to haul dirt around growing up.

The wheel scraped along the bottom of the barrow, and eventually wore a hole all the way through.

Wheelbarrows only have one wheel, so they’re liable to tip to one side or the other. It’s not a big risk on flat ground, but when you add in a slope and uneven muddy ground, you’ve got a sure recipe for a spilled load.

The western wheelbarrow design forces you to bear half the weight of the load yourself. This terrible design feature was actually an accident of history, traditional wheelbarrows had a wheel in the center of the load, not at the front.

Here are three specific real world situations where a bucket hand cart might serve you better than anything else.

Roaming the Perimeter as a Garden Cart

The bucket hand cart works great as a harvest pail for root vegetables like potatoes and carrots. Unlike a wheelbarrow, it is:

Cleaner. Just swap out new buckets when you need to.

Closer to the ground. You won’t have to reach when you’re harvesting down below. And its low center of gravity means it won’t tip.

Waterproof. No weird rusted out holes to leak water all over your newly swept paths.

Agile. The bucket cart is small and maneuverable, like a bicycle. It takes up much less storage space, which is important if your property is tightly packed like in New York or London.

Hunting and Gathering as a Grocery Cart

Ever wish you could take grocery carts home with you?

The bucket cart works for grocery shopping because you can walk it all the way to the store and actually take it inside with you.

I dare you to try doing that with a wheelbarrow. See how long before security arrives to have a chat with you.

You could even put some ice in the bottom if you’re traveling a long distance to the store and you’re worried about your ice cream melting.

Fixing Things Up as a Tool Cart

On its own or combined with the bucket toolbox, you can haul neatly organized tools around the work site. Or you can just chuck them all into a wheelbarrow like we used to do. You’ll just have to do a lot more sharpening and you’l likely to lose a lot more nuts and bolts that way.I

f you want your tool bucket to follow you, lead your wheeled bucket around with the bucket dolly and a leash.

Or use it to move loads of concrete.

Sure, a wheelbarrow can haul bigger loads of concrete. But did you know that one standard bag of cement mix makes exactly 5 gallons of cement? That’s way to convenient to be just a coincidence.

If you’re as sick of wheelbarrows as I am, keep your eye out for one of these hand carts. Their full name is Broll 5 Gallon Bucket Cart.

I’ve checked around garden supply stores but for some crazy reason they sell twenty varieties of wheel barrows and zero bucket carts. Unbelievable.

Amazon sells them now, although they seem to be on back order at the time of this writing.

Update: The newer bucket cart model comes with a bag attachment just in case you’ve already used all your buckets for other things.

Build your Own Folding Bucket Cart

I built a double decker bucket cart for hauling two buckets full of jams and jellies via passenger ferry.

The frame is an ordinary folding “granny cart” we found years ago in an alley somewhere, but with manly lawnmower wheels instead of dinky little granny casters. I didn’t have time to build a sophisticated strapping system but punctured bicycle tubes worked just as well.

I wheeled this cart laden with 50-60 pounds of fruit preserves for over a mile with no problem whatsoever.

This cart is a huge hit in dense urban areas like New York City where elbow room is an endangered species. Groceries are kept in their bags and hung on an ingenious set of racks for easier sidewalk cargo transport.

The folding grocery carrier can carry up to 70 pounds and stores into a tidy 31″ x 14″ package. It’s made by Hook and Go and available on Amazon.

Back in the Old Days…

Here’s a special bonus for you for making it all the way to the end of an article about bucket carts. This antique metal bucket cart is a pensioner – it’s no longer used to cart water around. It just has to sit in the garden and look dignified.