One of the first Five Gallon Inventions I ever came up with was a river cooled 5 gallon bucket cooler.

This is the Cowichan River, a world famous river tubing destination.

At the mouth of the river sits the town of Lake Cowichan. Its economy is held up with tubing dollars. You can find rafts, tubes, drinks and coolers sold everywhere.

When we tubed the Cowichan, we had bought at least a dozen adult beverages to enjoy on our lazy cruise, but we couldn’t find a cheap waterproof cooler to keep them in. Even the sad disposable Styrofoam ones were 15$ at the hardware store.

That’s when we spotted a 5 gallon bucket for less than 5$ at the same hardware store. Since the bucket would be towing along behind us in the cool water, we didn’t even need to fill it up with any ice. It worked perfectly, and our five gallon idea was noticed all down the river. I like to think we started a trend that day!

These are my favorite 5 gallon coolers because they stack and they are color coded. Unlike the sports cooler below, they are designed to hold bottles and cans – so they would have worked perfectly on our tubing adventure.

Depending on your poison of choice, these coolers hold

– with space left for plenty of ice.

These stackable 5 gallon coolers are manufactured by Coleman. I’ve only seen them available online, but a camping store like REI would probably have something similar.

We own one of these Rubbermaid insulated coolers as well. They’re not designed to hold bottles so this wouldn’t have worked on our tubing trip. These units hold straight liquid.

Since it’s insulated, we use it when we need to keep a liquid either hot or cold for an hour or longer. A standard 5 gallon bucket alone won’t keep temperatures consistant that long.

More specifically, we use this for brewing, during the mashing stage. Mashing is soaking beer grains in hot water which transforms starches into yeast-edible sugars. The mash stage takes an hour and needs to be held at exactly146F the entire time.

We got our insulated liquid cooler on Amazon. I’ve also seen these at Home Depot and other hardware stores. I’m sure sports stores would carry them too. 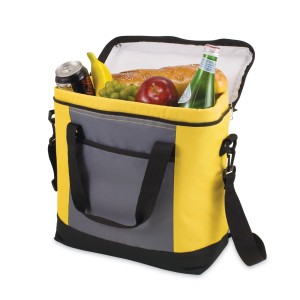 This is a cloth-based 5 gallon cooler. It holds 20 cans – the same as the stackable cooler, but it has a strap is can be hauled by shoulder like a laptop bag or purse. But unlike other bags, it’s insulated.

This bag is from Picnic Time! They also have backpack coolers which I won’t go into here, but might on the 5 gallon backpack article.

Check out Picnic Time’s Amazon store for more details about this and their other bag-based coolers.