I used to wash 15 buckets a day back when I picked up compostable food scraps in 5 gallon buckets in Victoria. The buckets had to be clean enough to sit for the next week in an office environment without stinking. It would take me 1 hour to wash those 15 buckets.

Then I started lining those pails with paper before I dropped them off for people. All of a sudden, clean-up time for those 20 buckets shrunk from a full hour to less than 15 minutes! My workload was cut by a factor of 4, just because I took 10 seconds to line my pails.

I used to use paper bags from the grocery store – they fit a 5 gallon bucket perfectly. Try it yourself.

Unfortunately I would run out of paper bags really quickly, so I ended up developing a method to line pails with newspaper instead. 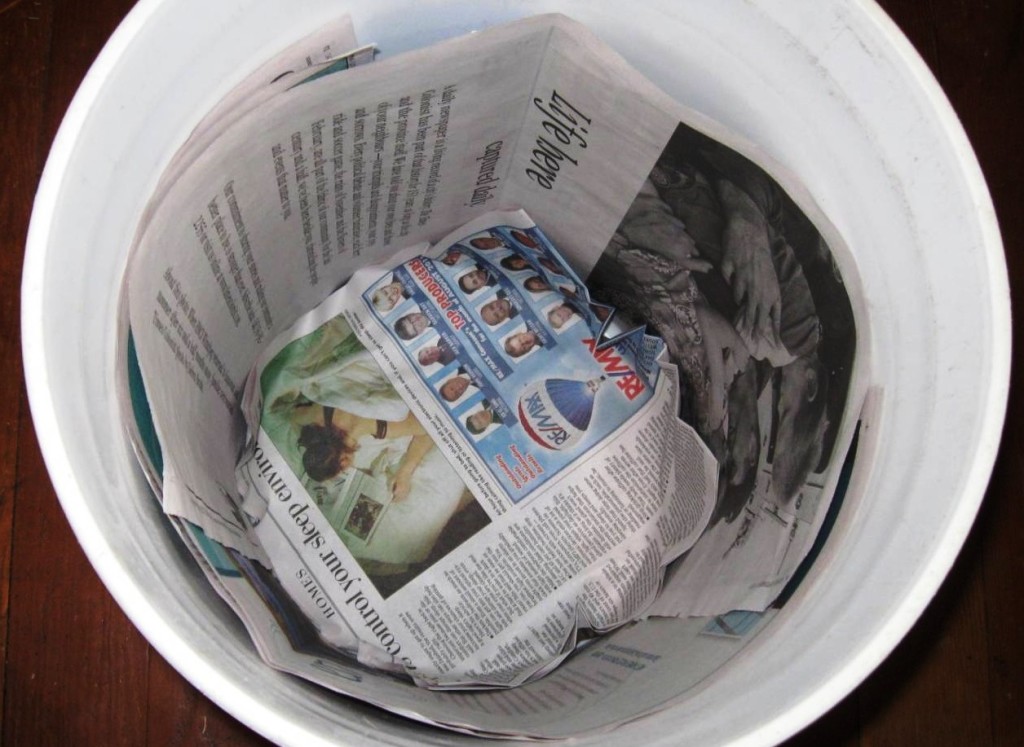 However – newspaper doesn’t offer a whole lot of protection and it can’t handle much moisture at all. Which is why so many people prefer plastic pail liners.

The cheapest pail liners are just glorified garbage bags. That’s great if it’s just garbage you’re trying to deal with – but a more burly pail liner can hold its shape even the bucket to provide the structure.

Ever tried to repair a hole in a plastic bucket? No matter how much duct tape you use, water will still eventually find a way to leak. When you’re trying to restore the liquid retention capability of a bucket, these stiff pail liners from Vestil are the way to go. It’s similar to the way we fix a plastic bladder in our Walls o Water – install a new bladder.

You’ll want to primarily use a pail liner to keep a bucket in good condition. There’s a few reasons you might want to do this.

If you’re using a metal bucket to store some kind of liquid, you run the risk of the bucket getting rusty. I’ve seen this regularly, and it’s a major reason why plastic buckets are more popular. With a good 5 gallon pail liner, you keep your steel bucket clean and rust-free.

In brewing beer, you always want to make sure your brew vessel stays completely scratch free. That’s because every little scratch or ding offers a toehold for bacteria which can ruin your batch. A pail liner offers an extra layer of insurance against anything that can scratch of dent the inside of your brew bucket.

And as I’ve already mentioned, a pail liner will help keep your bucket clean when you’re keeping anything nasty in it. That includes used motor oil, moldy sandwiches, or even human waste in a 5 gallon bucket composting toilet system.